When you get into the business of strength coaching (or even personal training), you have this idea that it’s all about training – designing programs, running lifting sessions, organizing conditioning work, and hangin’ out in a room full of iron.  You dream of working with athletes until they make it big time, maybe even turning that young high school quarterback into the next Andrew Luck. Deep down, it’s a little bit about you.

As you get into the profession, you slowly realize that it’s more than just training. When I was at a DI university for eight years, I found my office constantly full of athletes just needing to talk. Sometimes it was about school and tests and sometimes it was about their coaches and practice. More often than not, I was just a listening ear, someone for them to vent to. But in the end, I always had them leaving my office with their chin up.

As my athletes graduated, they would come and say Bye and Thank You for  the help I gave them over the years. Then, they were on their way into the real world.

It wasn’t until I left the University that things would come back full circle. I started to get facebook messages and emails from former athletes. Some asking for professional advice of wanting to get into the strength and conditioning field. Others finally hit a point in their lives where they realized that the training advice that I had given them over the years was actually paying off – and they were writing to say thanks.

Over the past few months, I had been helping a few of my former soccer girls with some training and nutrition stuff. These girls were part of one of my best classes. (I had watched them go through some tough times, so we were a pretty tight-knit group.) One girl had to pick up a second job, so life had been pretty hectic. Since she was done playing soccer, she wanted to stay in shape and get her nutrition back on track. I was guiding her through some Carb Backloading work that fit with her work and training schedule.

Then on Friday, I received this letter in the mail…. 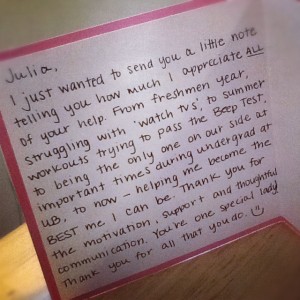 So, you see, it’s not all about training.  It’s not all about nutrition. Sure, I had pushed her through some tough years during her undergrad, but it wasn’t received as me being a ruthless dictator of the iron. It was about coaching, communicating, caring, earning trust, giving trust and respect and passing on valuable life lessons.

These university soccer girls sure didn’t have to buy me as a coach during their undergrad years. They kinda just got stuck with me. But what better way to continue to live out my life as a coach than to be inspired by the fact that I can change lives.

If you’re in the fitness/ strength coaching/ personal training industry, check yourself. Remember that people are buying you because of YOU.