I got started with weight training in high school. 18 years ago. I started with the Bigger, Faster, Stronger program.  I got stronger (obviously).

In college, once my track career was over, I started training like a bodybuilder. Body part splits, six exercises for each muscle group, following the latest muscle mag “workout of the month.”

Then I got involved with powerlifting. Squat, bench, deadlift. Max effort. Dynamic effort. 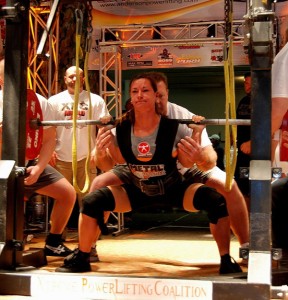 I became so engrossed in the sport that everything I saw in the gym was “dumb.”  Benching on a smith machine? Dumb. Close stance squatting? Dumb. Doing curls as your first exercise? Dumb.  And what’s even dumber than that??  Half range bench presses, quarter squats and clearly less than full range of motion leg presses.

Come on… admit it. You’ve muttered “that’s dumb” more than once while watching out of the corner of your eye (and maybe even catching a video on your phone).

Even though I had trained bodybuilding style back in my college years, I never competed and never really focused on exactly what I was doing and where it was taking me. I had no specific goal. So when I did my figure and physique shows this past year, it all hit me right square in my face.

Partial reps?  Shortened range of motion?  Using a weight that looks like it’s clearly too heavy but “cheating” out a few extra reps? Yep, I’ve become one of them. One of those “weirdos” in the gym that I snickered at. So what was the difference?

The difference was that I understood what I was doing. I knew why my program had partial reps. I understood what those partial reps were for and why they were included. I knew why bicep curls were the first exercise in my program on certain days. I still felt kinda silly… let’s face it, I’m a powerlifter and meathead at heart.  I still don’t want to go into the gym and do curls first. I’d much rather be deadlifting.  But it made sense to me. Perhaps others were watching me do partial range side laterals or half reps on leg curls and thinking “Why in the world is that girl doing that exercise like that? It’s totally wrong!”

But you know what, I didn’t care. I knew my program and I knew why. 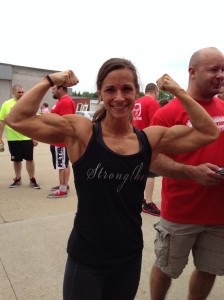 Lately, I’ve been seeing quite a few people rant about massive leg presses.

“Squats are where it’s at… no one cares about your half rep maxed out leg presses!”

But… before we judge, perhaps we just don’t know their program. Maybe there’s a reason.

Oh, I know what you’re thinking…. Julia, you didn’t see this guy. Clearly he has no idea what he’s doing. He’s just trying to show off. I bet he can’t squat 225 to parallel.”

You know what… who cares.  Could he get bigger/stronger/faster/more athletic if he was squatting?? Perhaps.  What really are the chances of him knowing what he’s doing? I think science shows there a 92.7% chance that he doesn’t know. But you know what… we still don’t know.

Whether you WOD every day, powerlift, Olympic lift, circuit train, Zumba, or bodybuild… that’s awesome. I could sit here and argue that if you’re only doing Zumba, you should get your butt in the weight room and lift heavy. But in the end, you have to love what you do. And judging other people’s workouts when we don’t know their story is us saying, “Hey, I’m better than you.”

Being in this strength game for 18 years, the more I broaden my view, the more I learn. I have found that things that seemed specific to powerlifting might have a carryover to sports performance. And things that might seem specific to bodybuilding might have a carryover to powerlifting. Keep learning. Learn from others stronger than you. Learn from those in other strength sports. Read, experiment and keep your mind open.

3 Responses to “People watching, program bashing… I’m better than you.”